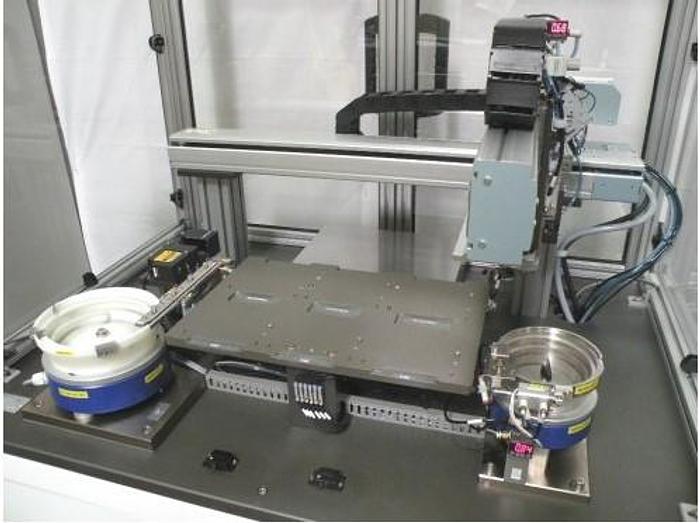 This Automation GT Automated Palletizing TCAG Pallet System looks to be in good cosmetic condition, showing some minor signs of wear. It powers up, as shown in the photos above, but the display reports that the "E Stop Activated" and needs to be released. I tried, but was unable to get this message to go away, and I was unable to get the machine to do anything else. However, this is the extent of my testing of this system, and it is being sold as-is. Among other things, it features a Yamaha FXYX 2-Axis Motorized Positioning Stage with RCX222 Driver, an Allen-Bradley MicroLogix 1500 PLC with two DC Input Modules, and two DC Output Modules, a Maple Systems Operator Interface Touchpanel Display, two ATEC-CYL Vibratory Feeders (M0363 and M0364) each with a C210-80 Vibration Generator / Cotroller, a Keyence VG-036T & VG-036R Sensor Assembly with VG-301 Controller, and some assorted sensors and SMC Air Actuators, as shown. Approximate overall unpacked dimensions: 42"L x 61"W x 82"H.